A Brief History of the Glaucoma Research Society

Some years ago, Dr. Donald Minckler, along with Drs. Raymond LeBlanc and Stephen Drance, compiled a brief history of the Glaucoma Research Society and its predecessor societies. This was a superb initiative as it is important to record our rich history for the benefit of past, current and future society members. It had been my intention to expand on the work that Don, Ray and Stephen had initiated and supplement it with pictures and documents from previous meetings.

I am pleased to finally share this augmented history of our society, which was presented at the farewell dinner at the 2016 GRS meeting in Seoul, Korea. I have concentrated more on the society and its meetings prior to 1986 as our recent history is relatively well documented.

In the summer of 2016, Dr. Jack Hetherington sent me an old group photograph that initiated the research for this project. As it turned out, the story behind this picture is a story in itself! It also was the impetus for me to track down as much material as possible. There are so many individuals who have taken their time to provide materials, verify information and speak to me, including Drs. Lee Alward, Douglas Anderson, Stephen Drance, Franz Grehn, Sohan Singh Hayreh, Anders Heijl, Roger Hitchings, Günter Krieglstein, Alan Laties, Ray LeBlanc, Paul Lichter, Don Minckler, Paul Palmberg, Harry Quigley, Robert Ritch, Marvin Sears and George Spaeth.

I hope this document will be the basis for future officers and members to build upon and improve. Frankly, for me personally, this has been a delicious adventure that often took precedence (and was also often more rewarding!) than the daytime job. It is vital to know that our society has evolved from such a rich history with giants in ophthalmology such as Sir Stewart Duke-Elder and Professor Hans Goldmann. Most of these luminaries are no longer with us and looking forward, it is important to recognize our history as we hand over the reigns to our successors. If we can glean even a small nugget from our past, we will be so much better off.

As I was soliciting materials from meetings prior to the mid-1970’s, Jack Hetherington sent the picture below as one taken at the meeting in Albi, France in 1974.

Because I wanted to identify all of the individuals for this history but could recognize only a small handful of them, Jack was kind enough to send this detailed (though not quite complete) handwritten list. 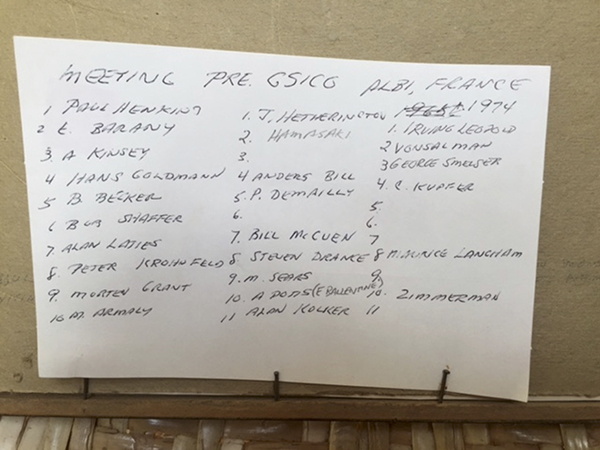 Thereafter the fun began! There was a lively debate, and often-friendly disagreement, among those I spoke with as to who some of these individuals are (or not). Among the humorous discussions included Stephen Drance who recognized #26 definitely as Doug Anderson. However, subsequently Harry Quigley declared almost as confidently that it definitely was not Doug. Attempts to break the tie were not entirely successful. Paul Lichter was not sure and Paul Palmberg told me Doug used to have spectacles that look very much like #26 is wearing, but would not actually confirm it was Doug. The icing on the cake was that Doug himself (who entered the debate later on) was not sure it was him! 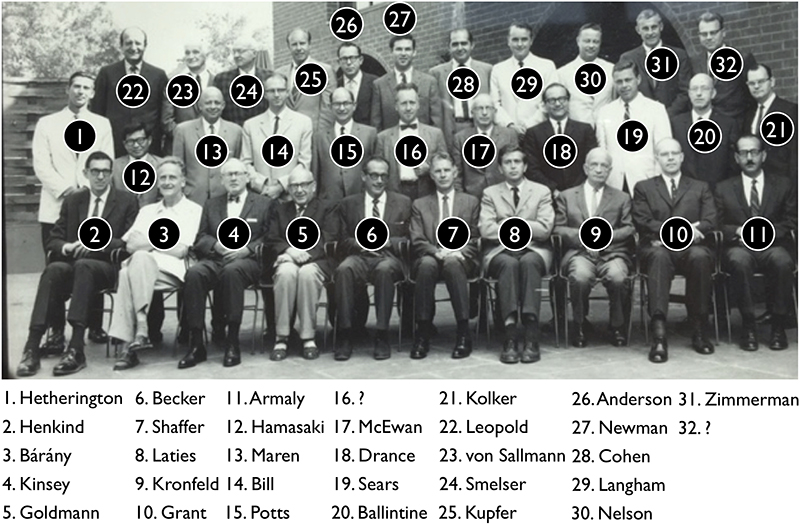 As you can see, two individuals are still not identified and I would love to hear from any members on their identity and on the veracity of this list.

But this was all a little immaterial with regard to our society. Marvin Sears (#19) who identified many of these individuals later said he was fairly sure he had never been to Albi! To add to this, Sohan Singh Hayreh (who also helped with the identification) said he was definitely in Albi and wondered why he was not in the picture. To cut a long story short, while very interesting, this picture was not taken in Albi and was not at a meeting of our society. However, it planted the seed to build upon the work that Don, Ray and Stephen had initiated. To this date, I am still not sure where and when the ‘Albi’ picture was taken, and would welcome any input!

Subsequently, both Doug Anderson and Sohan Singh Hayreh sent me the group picture below unquestionably taken from the meeting in Albi. Further details of the meeting appear later in this document. 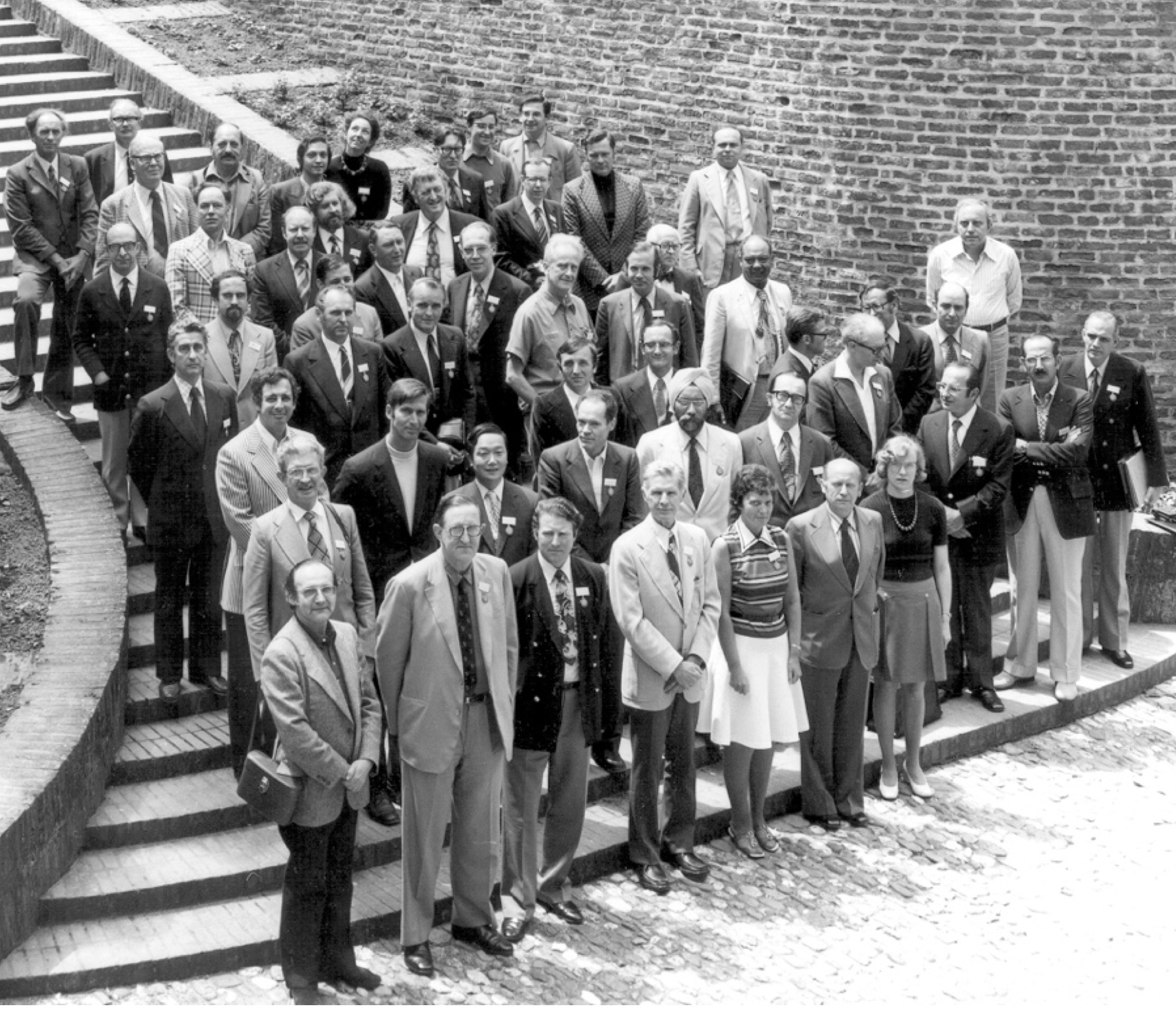 The first meeting of the present day GRS was held in Sainte Marguerite, Quebec, Canada in September 1954, however, neither the meeting nor society had a formal name. Rather, it was an ad hoc Symposium on Glaucoma under the auspices of Council for International Organizations of Medical Sciences and its sponsors, UNESCO and WHO. This meeting took part immediately prior to the International Council of Ophthalmology meeting in Montreal and New York.

There were only 20 invited participants, including Professors Francois, Friedenwald, Goldmann, Grant, Leydhecker, and Duke Elder who chaired the symposium. The symposium was carefully recorded and published with a preface and contained discussions on anatomy, physiology and pathology of the vascular circulation, aqueous production and outflow, gonioscopy and clinical aspects. 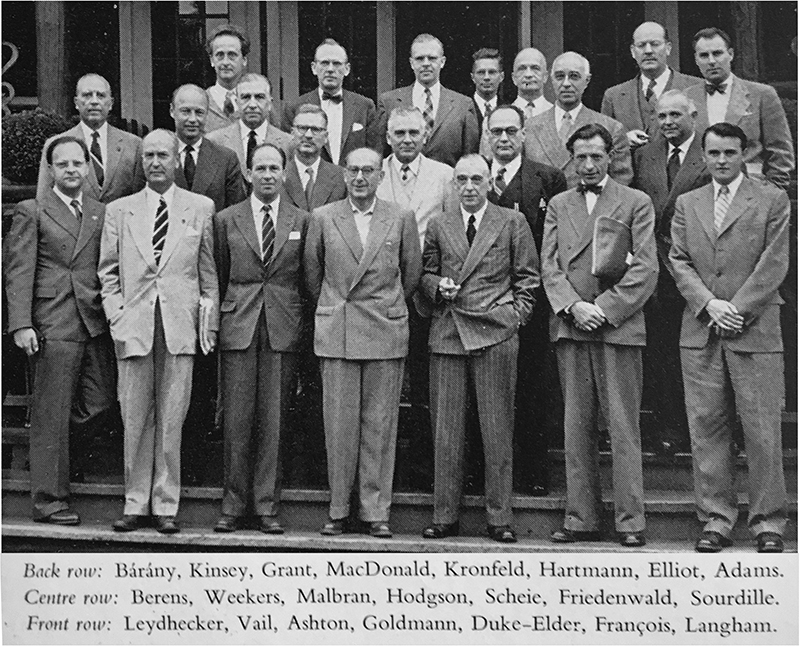 There is an insightful introduction by Duke-Elder on “The Problem of Glaucoma” in which he reviews definitions and the possible role of systemic disease in glaucoma with a reference to the term “sick eye in a sick body.”

Later in a short editorial, Duke-Elder wrote that the delegates formed “…a very happy family and that the atmosphere of the entire meeting was rendered as nearly perfect as it could have been by the isolation and beauty of the Alpine Inn, at Ste. Marguerite, situated in the midst of the Laurentian mountains.” Further, that the ideal symposium should be one where “…all inhibitions are lost and argument is free and untrammelled.” and that at this first meeting, “..the most important thing that emerged was that definite lines of presumptively fruitful research were laid down for the future in which it is confidently expected that the various contributors to the symposium will happily collaborate.” Certainly, this still remains the objective of the GRS.

The Alpine Inn, which still exists today, was built around 100 years ago. There are some interesting archival pictures, which give us a glimpse of what the atmosphere at this first meeting may have been like. A review of the meeting proceedings published in the British Journal of Ophthalmology reads, “A whiff from the debating chamber enlivens the pages (and that the book) is a delight to read and should enchant the dullest ophthalmologist.”!

The second meeting was held four years later in Liege, Belgium on 2-6 September 1958 and organized by Professor R. Weekers. There were 26 participants, many of whom were also present in Sainte Marguerite, with the notable exception of Duke-Elder, who nonetheless wrote a praiseworthy review in the British Medical Journal of the proceedings of the meeting, which are published in Documenta Ophthalmologica (volume 13, issue 1, 1959). 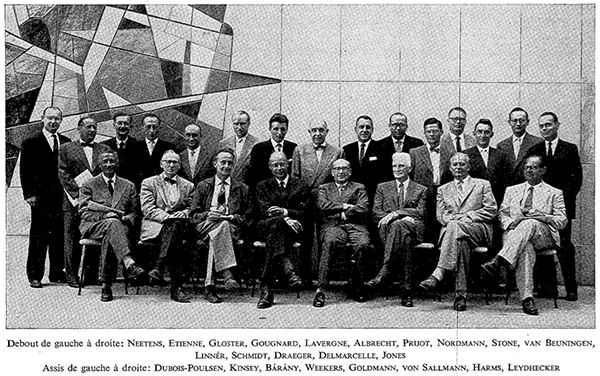 In the proceedings, the introductory words were written by Weekers and Goldmann, who presided over the meeting, and provided the closing summary.

The third International Symposium on Glaucoma took place in Tutzing Castle, Bavaria, Germany on 5-10 August 1966. Again, the timing of the symposium coincided with the International Congress of Ophthalmology held the following week in Munich.

The 36 participants at this meeting discussed topics that included the uveal circulation (Bill), topical steroids and IOP (Armaly) and complications of glaucoma surgery (Chandler). The proceedings, whose contents can be found here also contained the classic paper on early visual field loss in glaucoma by Aulhorn and Harms. In his Preface, Leydhecker reminds us that the word “symposium” means to drink together and discuss topics suggested by the symposiarch, who was Goldmann and who also wrote a summary of the discussions. One of the meeting sponsors, Winzer, provided wine that was “..gaily appreciated by all participants.”!

The fourth meeting was held in Albi, France on 20-24, May 1974 and had 56 participants. The meeting, entitled International Glaucoma Symposium, was held as a satellite meeting of the International Congress of Ophthalmology held in Paris that year. The proceedings were edited by Professors Etienne and Paterson and show a broad range of topics discussed at the meeting that are remarkably relevant today. For example, Douglas, Drance and Schulzer pondered on the nature of the structure-function correlation in glaucoma. The proceedings also contain a witty poem by Dr. Paul Henkind entitled “Glaucoma 1974”, dedicated to Shaffer and Etienne.

Formation of the International Glaucoma Committee

The first meeting of the Committee was held in Nara, Japan on 7-11 May 1978 and Leydhecker was charged with organizing the group and the programme. Interestingly, in the group picture below, there is reference to the International Glaucoma Club, a moniker whose reference I could not find in subsequent documents.

The proceedings of the Nara meeting (whose content pages can be found here) were edited by Krieglstein and Leydhecker, and entitled Glaucoma Update I. There were 5 subsequent volumes ending with Glaucoma Update VI, with the contents of the meeting in Edinburgh in 1998. 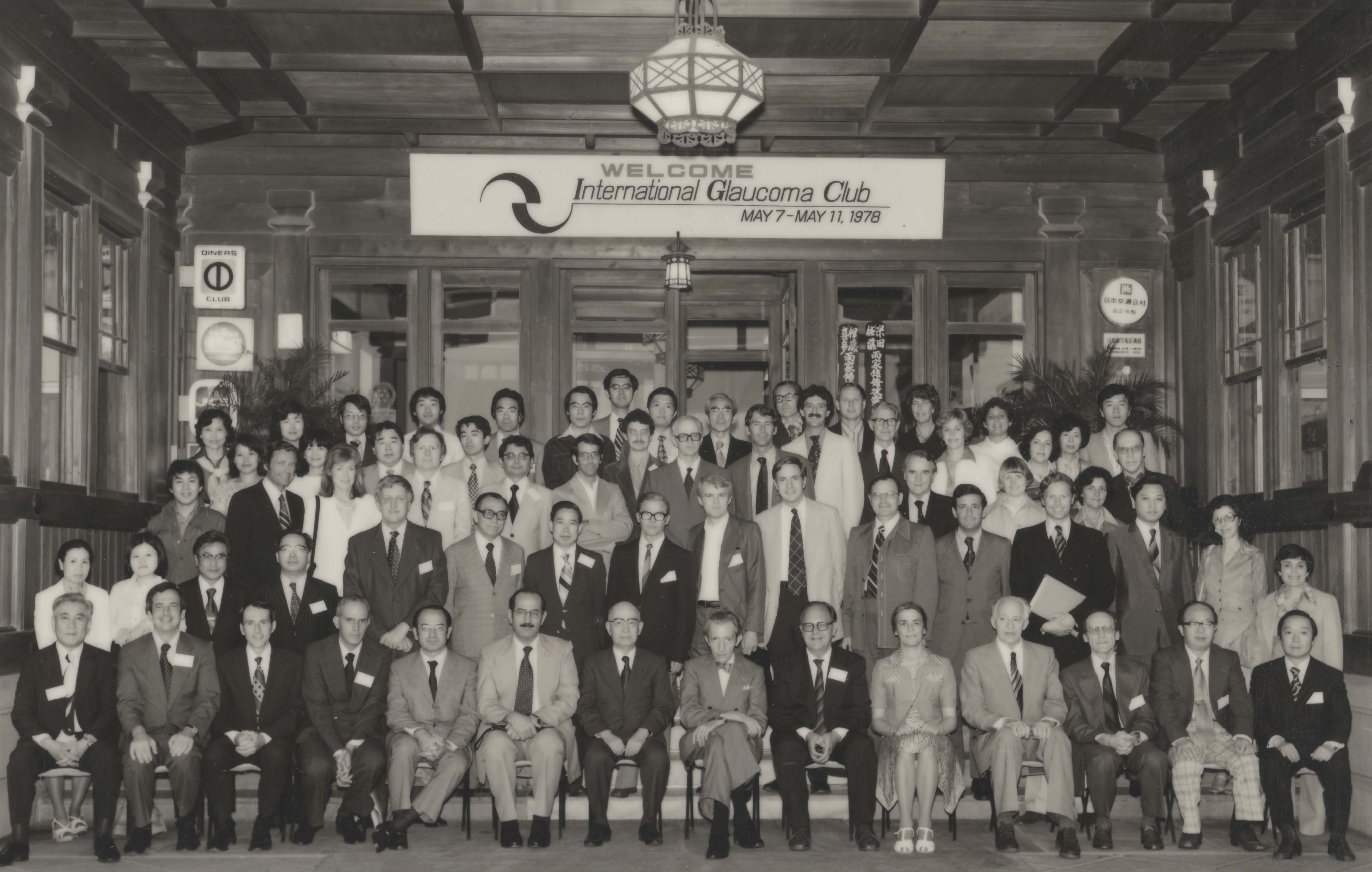 Prior iterations of the GRS

In 2005, the society was renamed Glaucoma Research Society after becoming independent of the International Congress of Ophthalmology. New by-laws of the GRS were established in 2007 and the society was registered as a non-profit organization in Zug, Switzerland.

The next meeting after Nara (1978) took place held in Carmel, California on 22-27 October 1982. The group picture below from that meeting shows many of the participants who had attended prior meetings. The contents of the meeting proceedings published as Glaucoma Update II are available here. 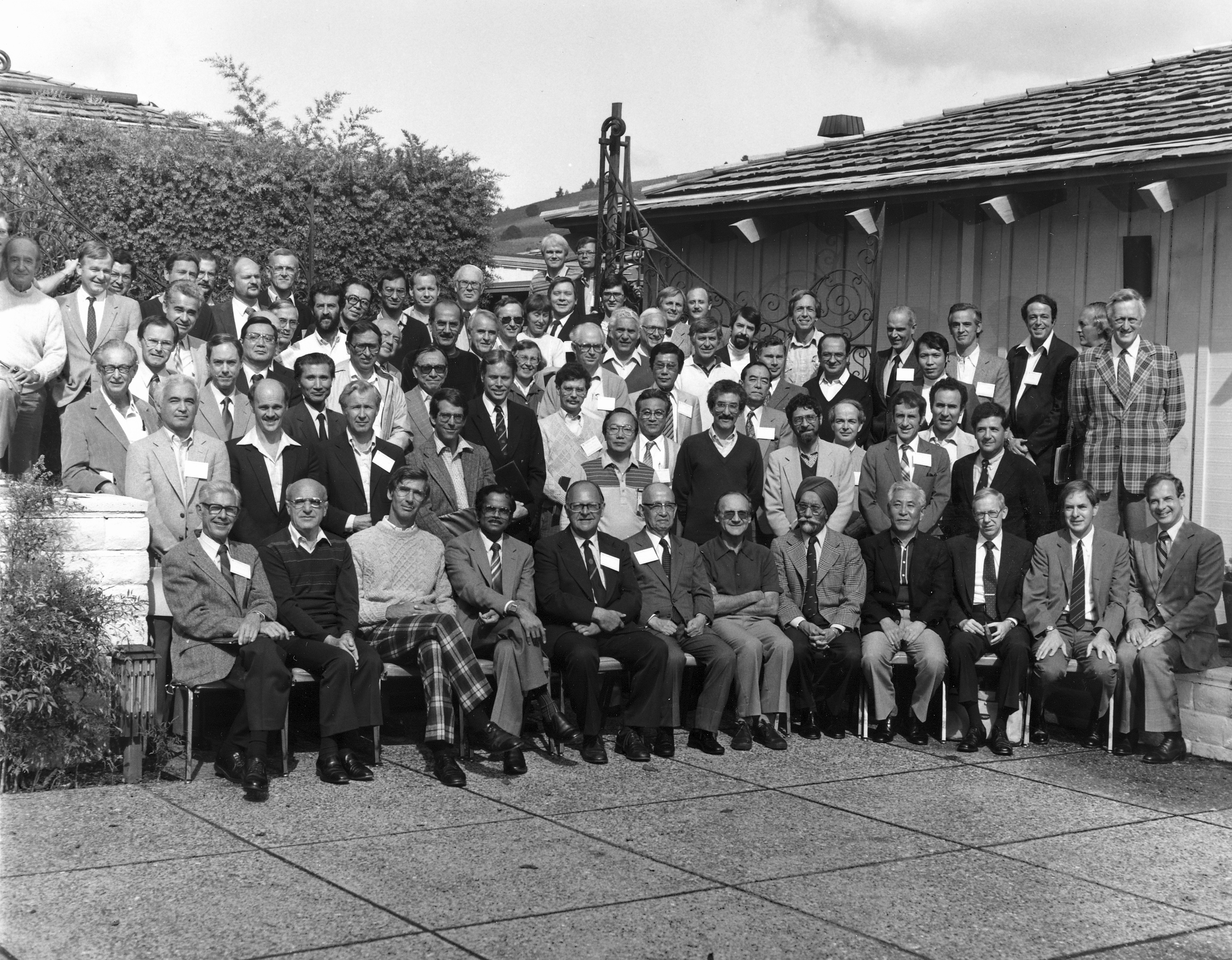 The collegial and social activities remained an important part of the camaraderie. The picture below shows (from left to right), Drs Shaffer, Phelps, unidentified, unidentified, Hayreh, Nagasubramanian, Perkins and Langham. 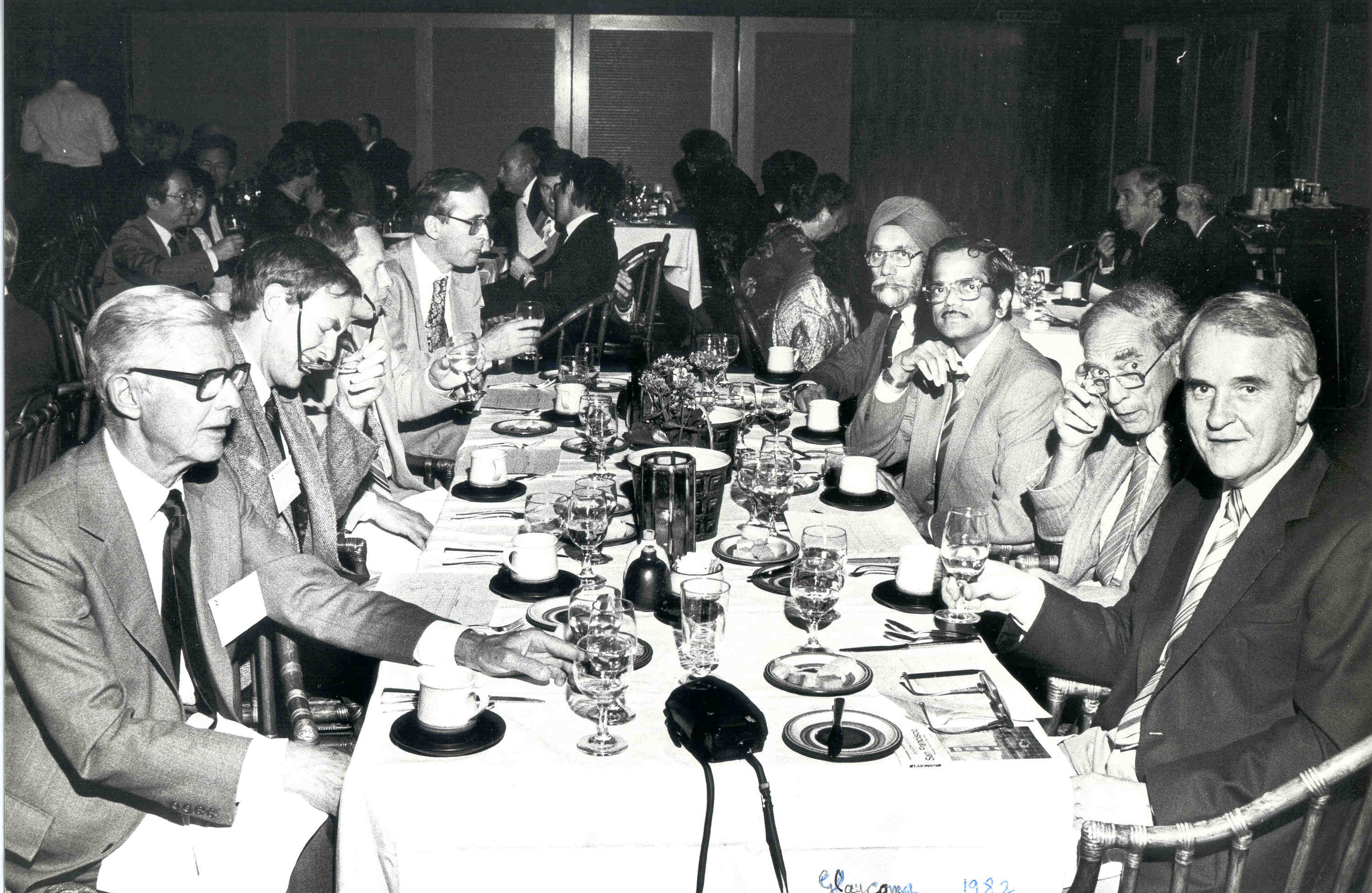 A list of all prior meetings, officers of the society and Goldmann Lecturers can be found here.